After acquiring a gigabit switch and a network attached storage (NAS), I was forced to admit that my computer installation has a definitive SOHO scent. In fact, one finds quite a few of the essential concepts and elements of a "real" network: 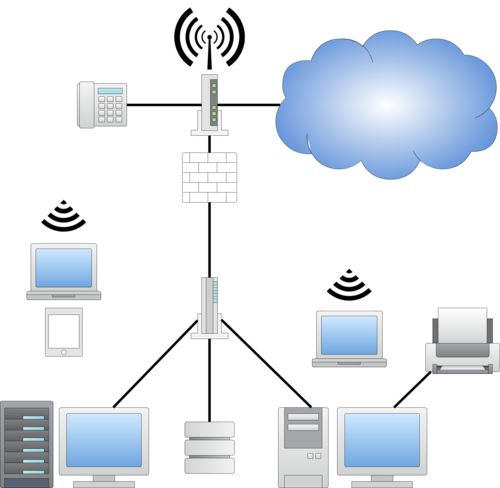 For example, there is a router, a firewall, a switch, a wireless access point, a RAID 5 NAS, and clients connected either by the Gbit link of the switch or wirelessly by the router. There's also an all in-one printer, scanner, and copy machine. In a professional network, dedicated devices would take care of each of these services, but the intended functionality is the same (albeit here at a much smaller scale).

How the hell could that happen to me, who doesn't even have a smartphone and whose plasma TV cannot display 3D contents? How?

Let's see how this madness started.

1995: Custom-made, Pentium I 90, 16 MB RAM, 512 MB HDD, Windows 95/Redhat 2.0
Highlights: Comanche, Doom, Heretic, Hexen, Descent, Duke Nukem 3D, Command & Conquer, and a PC Unix not unlike the Solaris I'd enjoyed on my SPARCstation 10 at Mitsubishi a couple of years ago. Coupled with the 33.6 K Modem with snafu as provider, and the 17" Viewsonic monitor, this was about the ultimate PC anybody could have bought at that time. It also costed a mind-boggling 8000 DM ...

And so that's how it all started. Just because of the games. 😉

When I was a kid, my grandma often prepared the famous German green sauce. It was a favored dish of mine, but I realized much later that I liked it just the way she'd done it, and not like it's offered in restaurants. What you get there is commonly nothing more than a mushy potato with a little dip of rather thin, liquidy consistency and mayonnaise-like taste. I was always bitterly disappointed. 😞 A home-made 'Grüne Soße' would have been the natural alternative, but to obtain the required fresh herbs is usually a difficult task outside the area of Frankfurt.

Luckily, the fruit shop just across the street at which I live offers the original white herb packs directly from Frankfurt for a very reasonable €4.95. So let's try and recreate the original 'Grüne Soße' of my grandma! Since the ingredients for this local dish will be not easily available to people living outside of Germany, I post the following recipe for four portions of the genuine Frankfurter Grüne Soße in German only.

Stephen Wolfram is one of the very few persons I'm interested in. Stephen was what you'd call a wunderkind, and consequently got his PhD in theoretical physics from Caltech at the age of 20. But he's not only a singularly gifted scientist, but also a clever business man. He left Caltech, for example, when he realized that his work on a computer algebra system would be owned not by him, but the institute. Four years later, he founded Wolfram Research, released Mathematica a year after, and became a multimillionaire this way.

I've started to use Mathematica in 1993, five years after its initial release. I still remember my feelings when I used it first. I was enchanted, entranced, couldn't believe what I saw on the screen of my toy-like Macintosh II. A software solving differential equations in seconds for which I'd have needed days! That opened up possibilities of which I'd never dared to dream before. From that point on, I couldn't stop to examine physical problems with Mathematica, and my enthusiasm soon led to a first publication. Twenty years later, Mathematica is the only commercial software which I'm continuing to use...and insist of using, in fact.

Last friday on #pdes, haui drew my attention to the latest entry in Stephen Wolfram's blog, entitled "the personal analytics of my life". Stephen is commenting on the statistics shown in this entry at length, but for me the following facts allow an additional conclusion.

For me, these points constitute the essence of a perfectly nightmarish life. Who on earth likes to be on the fucking phone the entire day? And these tricks to be online while being on a treadmill during your dinner break, do you think that's smart? It's pathetic!

Somehow, I can't help but to feel great pity for the rich and famous Dr. Wolfram. I hope he doesn't regret his insatiable appetite for being the guy who runs the show when he's old and sick and his 4 kids are out of the house. I'd recommend to look at Donald Knuth's decision and to learn from it.

I love fast and snappy updates. Besides a speedy package manager, the mirrors from which the updates are downloaded determine how fast the updates arrive at their destination. In Arch, the script 'reflector' is the most convenient way to select up-to-date mirrors with a fast response. Like that:

It's suddenly spring, but my bicycles' tires are all flat. It's high time to get a pump! But which one?

Well, let's see what I need.

First of all, the pump must be able to deal with Presta, Schrader and Dunlop valves. Second, it should have a secure and tight connection to all of these valves while still allowing me to change between them quickly and conveniently. And third, it should last longer than its predecessor. Ideally, it should still serve me in 20 years as well as today.

My internet research suggested that a 'Lezyne Alloy Floor Drive' should satisfy these requirements. So I got one, and after boosting my city bike's tires to 5 bar with just a few easy strokes, I felt sure that my choice was not all that bad. 😊 By the way: when flipping through the slides of the overview, I imagined a grizzled veteran with thick glasses and a shaggy beard as the author. Now look at that!

Delete ~/.htoprc and enjoy a more compact display than previously. An absolute must if you have more than six cores. 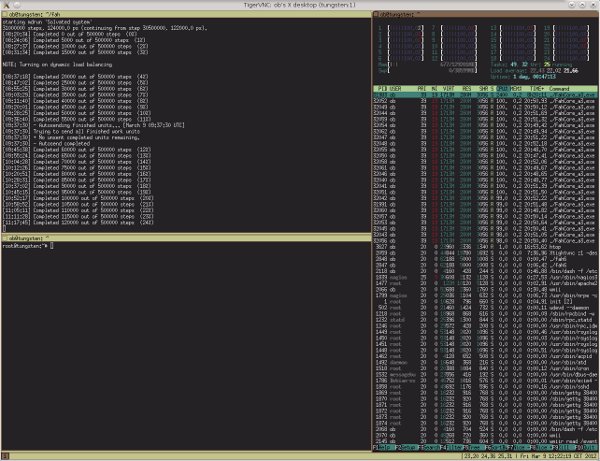 That's what my wife remarked after spotting my current desktop. And right she is. Just compare the screenshot of my current desktop below with the one taken three-and-a-half years ago. Well, what can I say? I'm a fossil, and I have no use for the Metros and Unities of the modern age. *shrug* I'm now using Arch Linux as my primary operating system on my desktop computer at home since 5 month. Time for a little review and comparison.

Were my initial expectations fulfilled?

More than that, they were exceeded. Arch proved to be a truly up-to-date distribution which simultaneously manages to be stable as the proverbial rock. My problems at the beginning were easily corrected by adding a script to /home/cobra/.kde4/Autostart, as actually described in the ArchWiki. Since then, I didn't experience any problem. Everything just works the way I intend it to do.

What are my future expectations/hopes?

A month ago I would have voted for package signing. That, however, has been implemented in pacman 4, and I'm currently entirely satisfied.

How does it compare to other distributions?

Oh my. That's really where I went wrong. See, Arch is great, but it does require some time to set it up properly. So I argued that I'd need an easier-to-set-up distribution for the office, where I manage time in slots of minutes. A mandatory requirement was that the distribution offers TeXLive 2011, and this excluded most distributions (foremost Debian, which I would have much preferred). So I've chosen Fedora Scientific, which comes prepackaged with most I need. Indeed, installation was a breeze and finished in 30 min. But after that...well, let's just say that I'm not enthusiastic about the Fedora way. The distribution is outdated (compared to Arch), offers a quite limited set of packages (compared to Arch), and its package manager is the slowest I've ever seen. Well, perhaps zypper is even slower, but not much.

Let's do some ranking (from 0 to 10) of the distributions I'm using every day:

Now, "actuality" describes how close the distribution stays to the current upstream. "Stability" is proportional to the frequency of curses uttered because of segfaults and their cousins during the use of the respective distribution. But WTF are "responsiveness" and "trust"?

Well, if you look deep within yourself, you'll find that there are reasons more important than the two objective criteria above for choosing a particular operating system. If it would only be about actuality and stability, Windows would score pretty high, which would be absurd. The question to ask is how do you feel when you use your computer? Do you feel comfortable? At home? Does it feel right? Do you like it?

"Responsiveness" is a soft criterion intended to reflect the user experience when doing administrative work, such as updating/upgrading, starting and stopping services, change system-wide settings, etc. Simplicity, speed, and transparency is what counts in this discipline. Windows with a value of 0 is used as reference.

"Trust" is an entirely subjective criterion with political dimensions. Do you trust the good intentions of Google? Perhaps not, but do you trust their intentions to create a fast and safe browser? You may not care for the former, but very much for the latter. "Trust" as used here contains both of these elements. As a reference, we use Windows with a value of 0.

These reflections will have a consequence. Particularly for Dell Minis hiding underneath Fujitsu Lifebooks...ArchBang is waiting for you, my little friend.

Personally, I need a change from time to time, and that's why I decided to give the look of this blog an overhaul. The banner is a small part of a photograph of Chris Gin. Indy's paws have the same cute knickerbocker look, but I'll be damned if I know how to take such a nice photograph of them.