Now, there are more than one or two things which drive me nuts when looking at the text of others, particularly if the text is actually a LaTeX source. I'll tell you about them another time.

Today, let's talk about something so basic that most people never even think about it. Basic text formatting aka the length of lines.

Remember the rule in the late eighties/early nineties: make a linebreak at 72 characters? Then you're my man. I followed that rule too. 😊

Have a look at that: 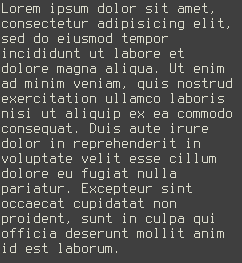 This type of writer was never informed that the above 72 character rule became obsolete 15 years ago. Evidently, people of this type also tend to exaggerate, but are at least strict in their mania. Nowadays, no editor, news or e-mail client I'm aware of has any problems with longer lines. To obey to this unwritten rule with an iron discipline in the 21 century is a tell-tale of an unflexible mind.

What's much worse than the above is the second type of writer, which is, unfortunately, far more numerous. This type basically follows the word wrap of its editor, but additionally inserts linebreaks accidentally, inadvertently ... stochastically. I don't really know. Nor do I care.

When I see such a text, I could just blow him apart (the writer).

What I want is so simple: let the editor do its job.