Last December, I looked at my wishlist and decided to get myself a Christmas present: the complete Sherlock Holmes series produced by the British television company Granada TV between 1984 and 1994. This series is scrupulously faithful to Conan Doyle's original and impresses most Holmes aficionados to be absolutely authentic. Jeremy Brett as Sherlock Holmes is viewed by many, including myself, as the definitive interpretation of the Baker street detective, and David Burke as Dr. Watson delivers an equally convincing interpretation of Holmes' obligatory sidekick.

Now, the complete series has never been published on DVD in Germany, but of course in the UK. A few days before Christmas, Amazon offered the set as UK import for 60 €, and I happily ordered. The fact that the set has not been approved and rated by the FSK didn't disturb me in the least, naive as I am. 😄

Well, at 24th of December the postman arrived with the package from Amazon. He was one of these seasonal workers DHL employs around Christmas, and didn't quite know how to operate the hand-held scanner used to capture shipment information. He nervously fidgeted around with this gadget, and had to try three times to scan the bar-code on the package until he was finally successful. I was mildly surprised when he asked for an identification, and even more so when he started to type my name, address and even the number of my ID card into his scanner. Before I could tell him that I was never asked for any kind of identification when I ordered, the device beeped and he started to sweat. I asked what's the matter, and he turned the display towards me: "verification failed".

How is it possible that a verification fails when there's nothing to verify? Well, after some hemming and hawing he finally admitted that he probably mistyped the address, and according to Amazon that's enough to result in this message. I advised him to just start from the beginning and enter everything correctly this time. That, however, turned out to be impossible: once the data are entered into the system, there's no way back.

Isn't that totally absurd? I already paid the shipment, I'm certifiably above 18 years of age, and just because of this fucking gadget they are taking my Sherlock away? At Christmas eve? Now wait a second...

The guy saw my face, panicked and threatened to call the police. Since it was Christmas, I let him live and instead sent a mail to Amazon. Within half an hour, a very polite Indian guy wrote back, offered his most sincere apologies, assured me that he'll send the money back within the hour, and explained that they have to proceed in this way according to the German Jugendschutzgesetz (law for the protection of the youth). And right he is: thanks to Zensursula (beware: explicit visual content!), all movies without an FSK rating are automatically assumed to be R rated and require an age verification.

The story has a happy end. Two weeks ago, I discovered the same boxset on Rakuten's play.com for 37 € and ordered it. It was shipped by Royal Mail via Switzerland, and from there as an ordinary oversized letter by Deutsche Post. Naturally, I was not at home when it was delivered, and of course it was raining heavily when I went to the post office yesterday. But nobody asked me to verify that I'm 18 years or older, and so here it is: 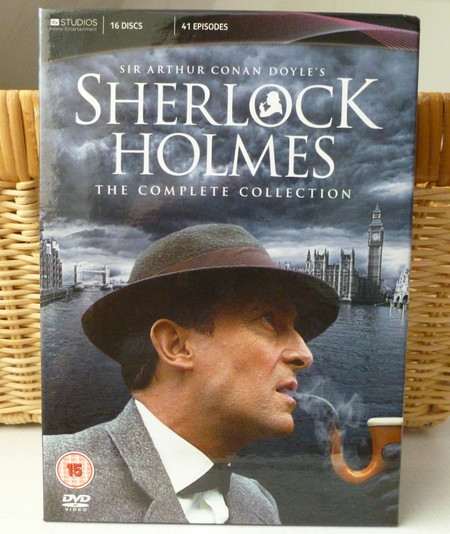 Note the 15 certificate from the BBFC. This rather high rating is probably related to the explicit display of Holmes' intravenous use of cocaine whenever he's bored.

Took me 4 hours to transcode all 16 DVDs with handbrake, but now they are waiting on the NAS to be watched at my leisure. The game is afoot! 😊