My Mini is now in its fourth year, but so far, I don't see any reason for its retirement. The combination of a small footprint (9") and a system free of any moving parts (aka noise) has remained unique. Contemporary netbooks are invariably equipped with magnetic hard drives and fans, and tend to be a good deal larger and heavier without offering any significant advances in terms of processing power.

There's a catch, of course: the Mini's SSD is only 8 GB in size, 5 of which I'd devoted to the operating system. Originally, the Mini came with a customized version of Ubuntu 8.04, and I've updated it step by step from Ubuntu 8.10 to the current 12.04. The updates became increasingly voluminous, and eventually the system partition was filled to 90% despite the removal of the entire TeX documentation and LibreOffice.

And what's more: I've really grown tired of Ubuntu. I never understood the hype, but I thought that using Ubuntu on at least one machine would be useful for supporting other Linux users (95% of which seem to use Ubuntu). Man, was I right: Ubuntu developed into the buggiest distribution I've ever used. I still continued to use it because I had myself arranged with it quite comfortably, but also out of sheer laziness. Still, I've never trusted the good intentions of Mr. Shuttleworth, and after the latest developments it became painfully clear even to many casual users what Ubuntu really aims at. So, the support is over, and you are on your own.

It is time to act! I've decided to do the following: 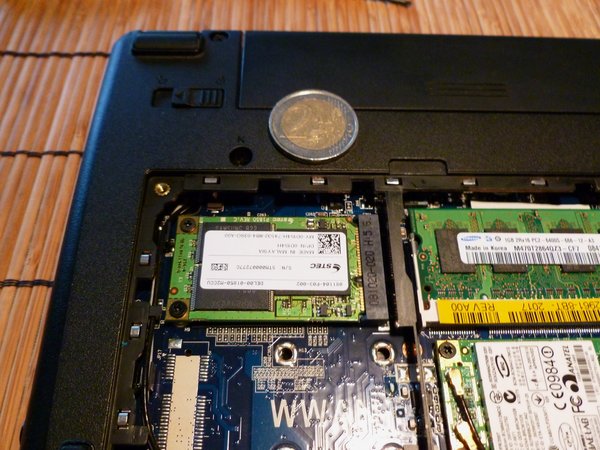 The SSD is right below the 2 EUR coin. I unscrewed it (that requires a Phillips #0 driver and quite some determination) and put the new one inside: 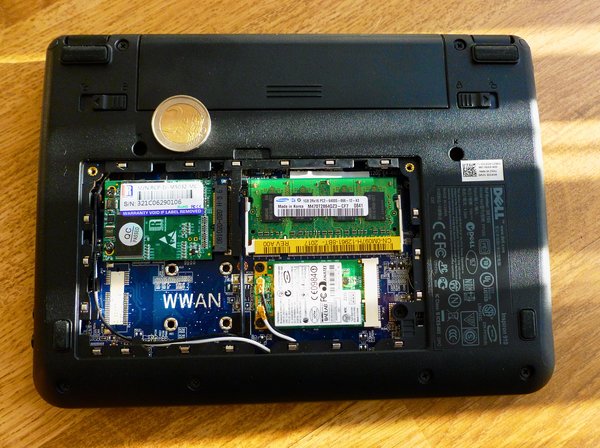 I'll keep the old SSD in a box until a museum will ask for it. 😉

What you also see in the above photograph are the latches for the battery, which may be replaced within seconds (which I have just done). The Mini may not look as sexy as certain Air- and Zenbooks, but it is infinitely more practical and durable.

ad 3.: I've opted for Crunchbang (#!) "Waldorf", a lightweight distribution based on Debian Wheezy: 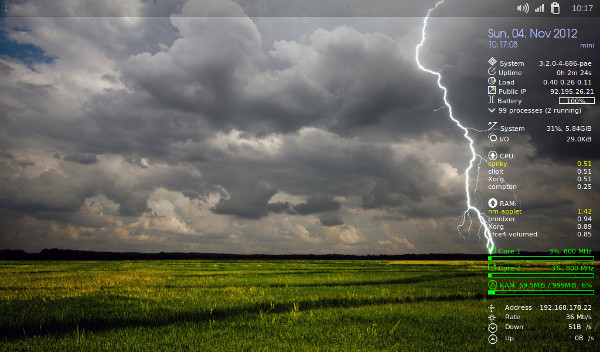 Installation was a breeze (including the encryption of /home) and took 15 min, and all hardware (particularly the Wifi card) was detected and configured correctly at install time. Everything worked right out of the box (even my LUKS encrypted SD card containing a btrfs filesystem). And in contrast to Archbang, to which I'm much attracted, I'll never need to compile important packages, which would be a nuisance on the Mini.

#! uses Openbox as the default window manager, tint2 as panel (visible on the top of the screenshot above), and dmenu as application launcher. A good choice, since all are slim and functional.

For the Mini, it's essential that I don't need a mouse to use the system. #! is perfect in this regard:

In Terminator, Alt-Left/Right switches between different windows. In Geany, F9 compiles a LaTeX document and F5 will display the pdf. In Iceweasel, Ctrl-Pageup/down will switch tabs, and all the rest is handled by Pentadactyl.

Apropos LaTeX: the persistence of TL 2009 was the main reason for me to shy away from Debian-related distris. Fortunately, TexLive 2012 has finally arrived also in the Debian (testing) repositories!

Hardware-wise, an "hdparm -t /dev/sda" returns 75 MB/s, more than twice of the original disk and on par with the magnetic hard drives on my notebook and desktop. And indeed, the Mini now seems to fly: a cold boot brings you in 20 s to the login screen, and then in 5 s to the desktop seen in the screenshot above. It's actually real fun to use the little guy, and I currently prefer it over my two bigger alternatives. 😉