One reader has suspected the "little tablet-like thingie" underneath the laptop on the left of the network diagram one post below to be an iPad. Let me assure you: it is not an iPad.

It is in fact an e-book reader, and more precisely a Kobo Touch which I've acquired around Christmas: 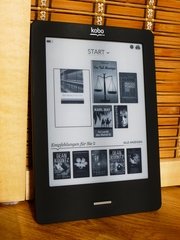 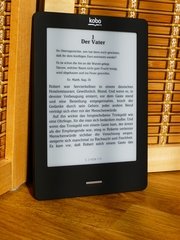 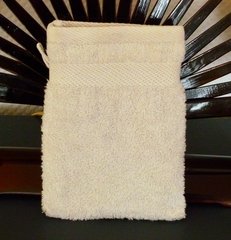 At that time and in this country, only Kobo and Sony offered what I wanted, namely WiFi access, a touch screen and the latest display technology. But I wouldn't have bought a Kindle anyway: Amazon's infrastructure reminds me of Apple's, and I strongly prefer an open attitude to the rest of the world (including an easy access to e-pubs without the need for calibre).

Am I satisfied with the Kobo? More than I anticipated. I still prefer real books for their tactile and olfactory feedback, but one can't possibly argue with a 185 g device holding an entire library. Having a search function, a dictionary and a built-in shopping solution doesn't hurt the case either. It is a new dimension of reading, period. And the Kobo utilizes this dimension quite nicely, I think.

Speaking about niceties: when you look at the photographs above, you're probably surplussed about the cover I've chosen. Really looks like a wash-glove, doesn't it? Yes, but it does so only from the outside! Inside it is made of carbon and titanium. It has an invisible organic solar module which supplies sufficient power for the Kobo to last indefinitely, and built-in organic LEDs which provide a dimmable reading light in the night.

Naaaa, it's just a wash-glove. 😄 The manila cover I actually bought gave off such a putrid stench that I couldn't use it. It's unbearable, and overpowering even after three month and a machine wash. Well, I love the glove. It's made of bio-cotton, fits perfectly, and attracts a lot of attention in the subway.