It was high time to get an replacement for my 6 years old desktop, which recently started to show clear signs of its age. I thus visited the configurator of Alternate, my trusted online computer store since more than a decade. I intended to combine plenty of CPU power, a GPU capable of running the occasional 3D shooter at full HD resolution and maximum details with 40+ fps, and a top-notch SSD capable of holding the base system as well as my home. All in one case and all cooled to arctic temperatures as silently as possible, of course. 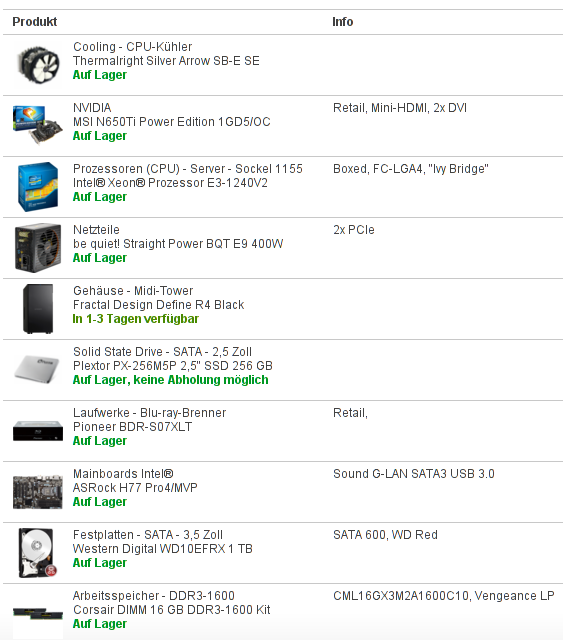 What will surprise most of you is the (for a desktop) rather exotic CPU. Why a Xeon, which is usually seen in servers, and not an i7? Well, the Xeon 1240v2 is identical to the i7 3770 except for the latter's integrated graphics and the resulting additional power consumption (77 vs. 69 W) and costs. And why no AMD, namely, an FX8350 with 8 cores and 4 GHz? Simply because the Xeon runs circles around the FX, and needs ony half the power while doing that. Even at full load, with all cores running, the FX can't keep up with the Xeon.

The GPU is only of entry performance level, but that's entirely satisfactory for me. Its very low power consumption and its reportedly near silence even under heavy load were the decisive factors which lead me to select this particular card from MSI.

Silence, or better to say, noise reduction, was also an important criterion for several other components. The case, in particular, is claimed to be designed for cooling even the most powerful systems while keeping noise down to a minimum. The power supply should be quiet already according to its name (note the meager 400 W, which are more than enough for this system). Finally, the CPU cooler is reported to be at least capable of silent operation, while at the same time, it is perhaps one of the most powerful cooling solutions available right now. This potential is important for me, as I may want to load my system for hours even on hot summer days.

Finally, I've finally decided to really put both the system as well as my home on one SSD, as announced previously. Unlike SSDs with the common Sandforce controller, the Plextor M5 Pro models do not rely on data compression to achieve their phenomenal transfer rates. The Western Digital HD, by the way, serves as a backup disk only. Their red series is explicitly marketed for high reliability even in 24/7 operation, making it particularly suitable for backup purposes. Furthermore, the 1 TB model I've purchased is a single platter design, and I expect that the disk is virtually silent.

All of the above were my expectations when selecting the components. Alternate actually built it exactly to these specifications and sent it within a couple of days. My next post will report on my actual experience with this system and whether or not it lives up to my expectations.